Enjoy the recordings of RustFest Barcelona.

Managing the stage at RustFest Barcelona

In 2019 I was responsible for the stage during the talks. Ranging from the prechecks with the venue before the conference (thank you Ferran and Jan-Erik), over to the setup on the talk days and syncing with the MCs during the talks as well as the TimeTable Service displaying the next events between the talks. 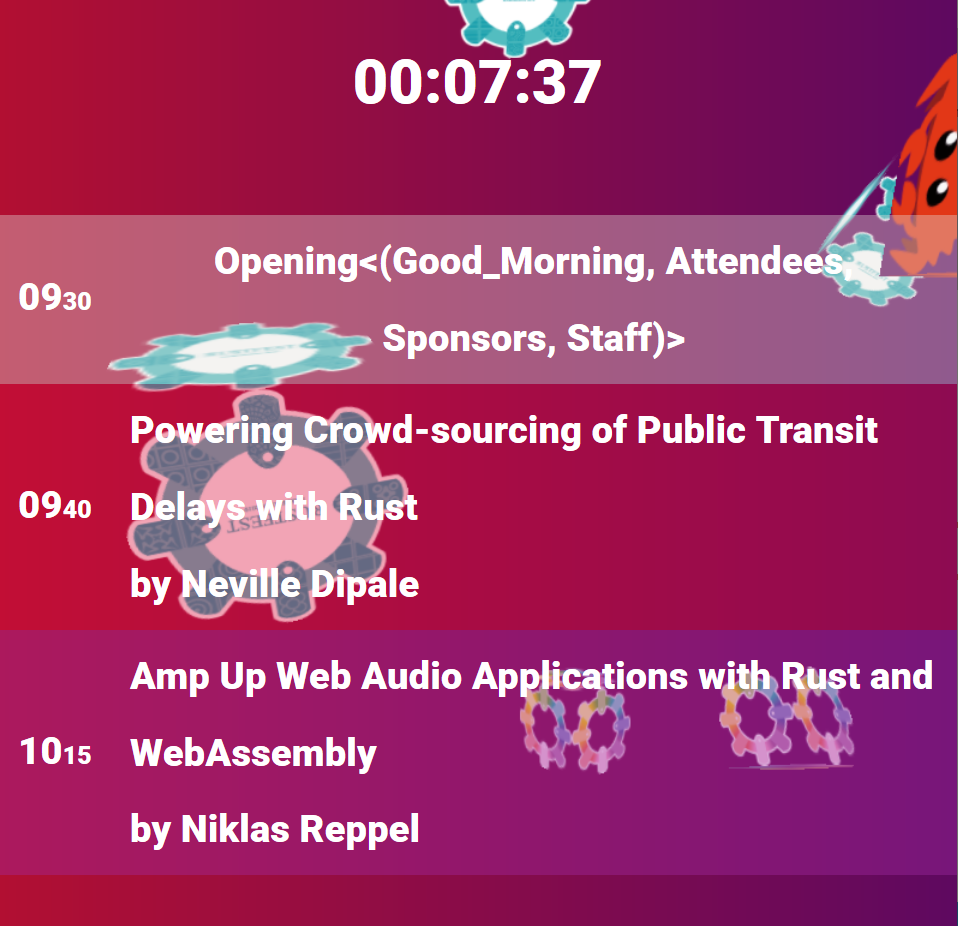 The system is built with an actix, HTML and JavaScript. The server reads the schedule directly from the source code of our barcelona.rustfest.eu website. All of this running on a VPS in a datacenter.

Then to feed the image into the various displays of the conference I tried to run the web service from a new Lenovo T495 with windows 10. Sadly, the output was a grey screen with some flickering. There appears to have been an incompatibility between the Vega10 graphics card, the (windows) driver and the auditoriums video system.

Luckily, the venue had a backup laptop with an integrated intel graphics card that was compatible.

We had two stick and one headset microphones. They are of good quality but not perfect, so there is always some background noise recorded.

Pro tip: make sure all the batteries are charged and that you have spares. Let us get a quick overview.

The biggest drawback is they have a very prominent side effect with beards: rustling!

One can mitigate that a bit by properly bending the microphone around the speakers cheek. However, there is a limit to that where the distance becomes to great for the microphone to properly pickup the voice.

Setting up the microphone, its cable and the box containing the battery and the sender must not be rushed. Very experienced speakers may prefer it when stage crew installs it on them. For first time speakers, I recommend that they install it themselves. Especially when the cable is routed under cloths. In any case: ask for consent before touching speakers!

Most boxes have a clip on so speakers can clip it onto belts, trousers, skirts or even bras. Alternatively one can put it into a pocket or similar too.

There are also huge advantages for the recording:

With these microphones the setup is much quicker: Just crab it and hold it in front of your mouth. No touching of the speakers required.

But they have two major challenges:

The second one an on premise technician can soften by making adjustments in volume.

However, because of the weight of the device people tend to lower it unconsciously over the course of their talk. Tell them in advance that you may signal them to raise the microphone again during the talk and it will be a much more pleasant experience for everybody.

To combat the rustling, clicking as well as the noise the sound system has modern installations have one or more noise suppression function.

Looking at the resulting sound recording with audacity revealing the effects of the system:

The noise was gone, this was perfect for the people in the auditorium, because they would hear the room tone. But the total silence between every little pause and sentence made it really hard to listen to the talks as a recording or stream.

Passing the audio to an audio improvement service did not yield any improvement.

After some thinking I had an idea: What if we added natural noise?

The first noise sample was recorded in a room filled with people holding their breath for five seconds at one of our meetups. The idea was that repeating these five seconds would lead to a nice atmosphere and prevent the harsh cut offs.

After listening to the first rendering it was great. Easy to listen to and understandable.

So I decided to listen to a talk in a tram for a couple of minutes. Then it hit me: The noise loop contained one step and one click. Both would repeat themselves every 5 seconds. I did not realize it when listening to short slices of 10-15 seconds. However, after 5 minutes it was disturbing.

The second attempt was to carve out every distraction I could hear with noise cancelling headphones. This lead to a much shorter noise sample, but it was way cleaner. Also I tested it by looping the noise itself for a minute and listening to it.

Finally, we added the cleaner noise to the audio tracks and passed the whole thing to an audio improvement service and the result was grand: Clean sound without any hard cut offs.

This year we streamed directly from the auditorium to youtube using the infrastructure of the university and a google account. For some reason the software was unable to connect with the stream key only, which we had setup before.

We tested the whole setup on Saturday before the talks.

On Sunday we had a small addition:

We tested the audio in the room but forgot to add the channel to the recording and the stream.

Lucky us, our awesome audience recorded the performance and Jan-Erik was able to reconstruct most of the performance with samples provided by members of our audience. Thank you again!